Menu
Log in
Register
Install the app
You are using an out of date browser. It may not display this or other websites correctly.
You should upgrade or use an alternative browser.

Staff member
Great start for Brazil with a comfortable 3-0 win over Venezuela, although it could have been 5-0.

bTW, Neymar tied Pele for most assists for NT at 47. And he is now 10 behind him in goals for all time leading scorer!
A

Staff member
Entertaining game between Chile and Argentina! Good to know the competition is not that terrible after all at Copa.

BTW, just hit me: this is Messi’s 6th Copa America! I would be shocked if anyone else has played as many or more, even going back to when the tournament was every 2 years.

Wish we had this consistency with at least one Brazilian playing this many tournaments....
A

Staff member
What a game! Brazil 4 - 0 Peru, where the first half was miserable but Brazil completely took over in second half.

Staff member
So after his goal tonight in Brazil’s 4-0 win over Peru, Neymar now has 68 goals in 107 games (ratio of 0.63 per game) , trailing Pele for Brazil’s all time leading scorer by just 9 goals!

Of note though , Pele scored his last goal at a relatively young age of just 30 years old in July 1971, where he would turn 31 three months later. Neymar is already 29 and barring the unforeseen, will likely play a few more years for Brazil and not only breaks Pele’s record, but distance himself from him or any future players.

And while I am not here to diminish Neymar’s amazing goal scoring stats, we also have to remember that Pele scored 12 of his goals in the 4 world cups he played, including 3 goals in the 1958 and 1970 World Cup finals. As a point of comparison, Messi shockingly has never scored a goal in the knockout rounds of the worlds cups, across 4 WCs he has played in so far. Neymar has also scored in two world cups so far, but most came in the first and second round and nothing beyond.
A

Staff member
Colombia is officially the dirtiest team out there. They never want to play Brazil, instead they come to cheat and break bones....

Brazil came from behind and scored the winner in the 98th min or so to beat these idiots.
A

Staff member
Brazil beat Peru and makes it to the final for the second time in a row. They await the winner of Argentina vs. Colombia.


All over Twitter and media in general, they are anticipating and really hoping for a Brazil vs. Argentina final (and that is understandable given the ratings, rivalry and the Messi/Neymar clash)

But I wonder if Argentina will also do the same and look past Colombia already, only to crash tom?
A

Staff member
And there you have it: we now have a dream final all have been waiting for: Brazil vs. Argentina, coming up this Saturday.
A

Staff member
We are less than 24 hours away from the best 24 hours in soccer history, with two dream finals:

Staff member
On the eve of the final tomorrow, I did an in depth analysis comparing Neymar vs. Messi and the two teams over all so far in the tournament

(Note: Messi played in 6 games, while Neymar played in 5)

*Interestingly, these stats are similar to the 2019 Copa America, where 8 different players scored for Brazil (through the final) vs. 5 players from Argentina. Also comparing to the 2019 tournament, Brazil scored 13 goals through the final vs. 7 for Argentina (both having played the same number of games) - so Brazil needs just one more goal tomorrow to equal the number of goals scored in 2019. But one big difference, in 2019 they both only played 6 games, compared to 7 this time. So while Brazil hasn't had much trouble scoring, at least in most games, it seems like things were clicking slightly better in 2019, even without Neymar. Of course, we can't compare the two tournaments (last min changes, bad pitch, lack of fans etc)

Conclusion: while the duel match up between the two superstars gives Messi the slighe edge, the team comparison gives Brazil the advantage, having scored more goals, conceded less and better goal scoring distribution from the whole team. But if Neymar wants to do better tomorrow, he has to focus on his shooting and scoring. Yes, he has arguably been the best player in tournament (or as good as Messi), it would help if he had a bit more goals in the 5 games he has played so far. In fact, there are 4 different players who have scored more goals than him (3,3,4,4) . But , as we mentioned, as good as Neymar has been, there is more diversity in scoring for the Brazilian team, so that is a good thing if you are a Brazil fan like I am! 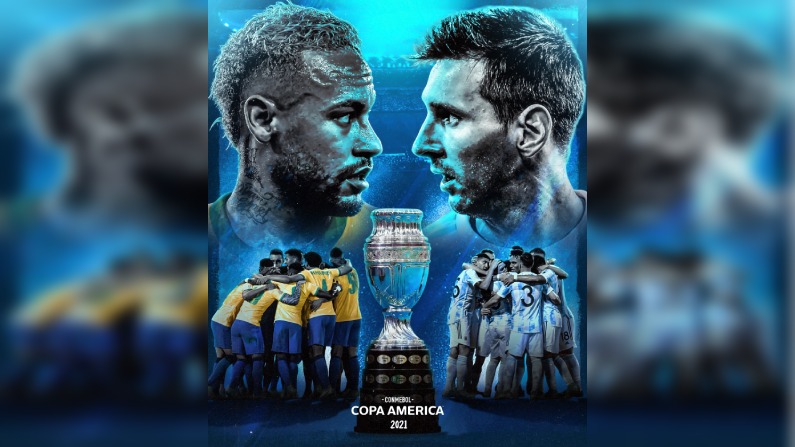 Staff member
My thoughts on the game tomorrow.....


While not denying Argentina has been in excellent form, if they beat Brazil, it is very likely on penalties. But then again, as we saw at Euro Cup (Spain and Switzerland) it is hard to win two back to back games on penalties. It is too mentally and emotionally exhausting, not to mention this is a final, where there is more pressure. If it does go to penalties, Brazil have some historical edge, in that they have won on penalties here in the gold medal game in 2016, as well as in the 2019 Copa America QF. Heck even in 2014 WC against Colombia. Not to mention, both of our goalies are more than capable of stopping penalties.

In the last 24-48 hours, the Brazilian team will have heard and faced a lot of questions about Argentina and Messi in particular. In fact, I was watching a live press conference on YouTube, where Thiago Silva was on podium and although I don’t understand Portuguese, you can see almost every other question had Messi’s name in it. So as I mentioned earlier, this is creating the perfect ‘us against the world’ scenario since a lot of neutral fans and FIFA officials probably want Messi to win. Don’t need to tell you how much fuel this will add to Brazil to come out swinging.

My prediction : 2-0 for Brazil. While Argentina has been the slightly better team, I think they eventually level off once they run into a good team, which already happened against Colombia. Brazil on the other hand has already gone through the ups and down and faced more adversity. And with more rest between games, playing on a better pitch, they will play better. Of course , the absence of GJ is not a good thing , as well as having the inferior bench. But at the end of the day, we still have VJ, and probably even Gabigol who a lot may not want to hear his name , but at least we know he scores goals for a living, so you never know what he could do if brought in extra time or so.

Finally, and though this can happen to Brazil too, I think Argentina could lose their cool if things don't go their way, whereas with Brazil, the one thing Tite has really improved on this team, is their desire to win and fighting spirit, till the very last minute, especially if they are behind.
A

Messi finally has an international title in his 10th attempt (6 Copa America and 4 WC) but his scoring drought in final games continues (5th international final where he fail to score) . In fact he was rarely involved in much. Yet ironically it is like only he mattered, including winning best player.

I feel bad for Neymar! He was amazing this tournament, doing everything he can, but just wasn’t good enough. His bad luck with Copa America continues:

-in his first CA in 2011, as a 19 year old, he played good but the team overall wasn’t good enough and they lost in the QF on penalties.

-in 2015, he was red-carded in a loss to Colombia and thus missing the next game, with Brazil losing in the QF on penalties to Paraguay.

-In 2019, which Brazil actually won, he was injured so didn’t get selected.

At the nest CA in 2024, he will be 32 and likely his last. With Messi likely done by then, Brazil will likely once again be the favourites to win it and I really hope he does. But of course, I and he could care less about CA if he can just win the WC next year!

That game reminded me of a very famous match between the 2 teams at Italia90. Brazil was all over Argentina but Argentina had 1 chance to score and they took their chance. I am happy for Messi, though I would have liked to have seen more Messi magic in the final. But just like Maradona in the WC1986 final, despite having a relatively quiet game, he inspired victory. When the game ended, all the Argentinian players ran towards Messi because they knew how much they had made him suffer for not helping him win tournaments previously.
You must log in or register to reply here.
Share:
Facebook Twitter Reddit Pinterest Tumblr WhatsApp Email Share Link
Top